Among the Australian War Memorial’s holdings is a little-known collection of Second World War posters from the USSR. Of particular note is a collection of around a dozen posters produced by the state-funded Telegraphic Agency of the Soviet Union (TASS).

Tallinn is Liberated portrays a soldier and woman in traditional clothing holding up a wreath, with a hammer and sickle depicted in the centre. 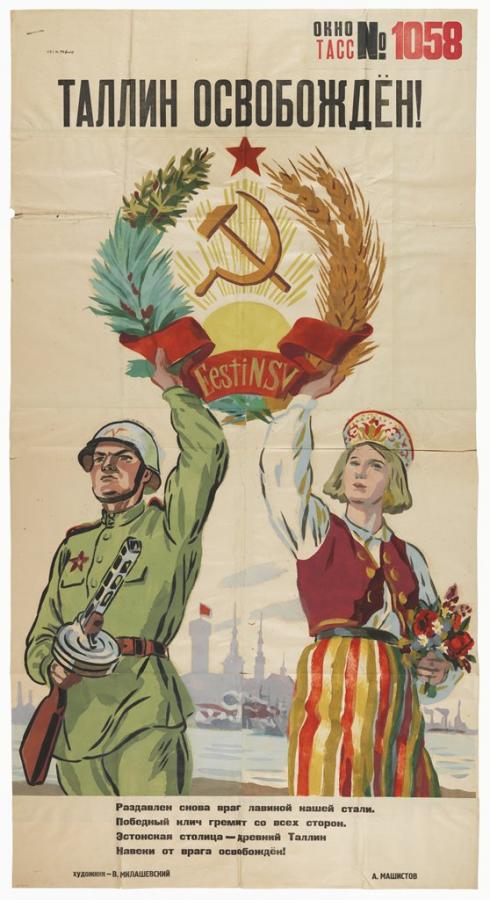 Vladimir Milashevskii (Telegraphic Agency of the Soviet Union), Tallinn is Liberated!, 1944, stencil and print with ink on paper, ARTV07491

From caricatures of Hitler, to symbols of Russian nationalism, these posters offer insight into the sorts of propaganda that was filling the streets of one of Australia’s most important Second World War allies.

During the Second World War, Russian poster production was prolific. In The Land of Suvorov, a Russian soldier of the Red Army stands to attention and salutes an apparition of the General of the Russian Empire, Aleksandr Suvorov (1729-188) – an image familiar to Russians – playing on patriotic sentiment to solicit funds for war loans. During the Second World War, Suvorov, a Russian war hero known to have never lost a battle, was used to invoke a sense of patriotism among the population. He became to Russia what Uncle Sam was for America. 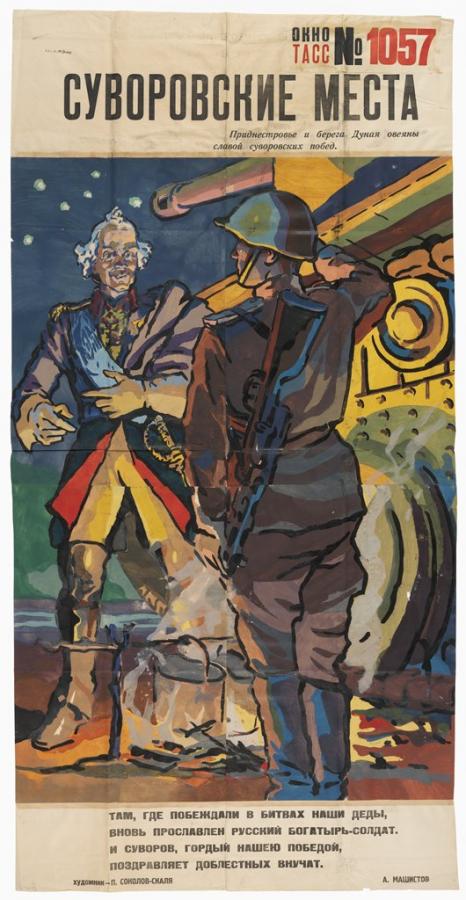 At TASS, some 70 artists produced around 1,000 editions of poster designs on cheap, thin paper, using stencils to aid rapid production. Despite their prolific production, owing to their poor-quality media and the nature of their display, few of these posters survive today. In 2011, the Chicago Institute of Art held the first major exhibition of TASS posters. A handful of smaller exhibitions later appeared at small galleries. Boxing in the Desert features a caricature of German Field Marshal Erwin Rommel being punched off a cliff by the hand of a Russian boxer. 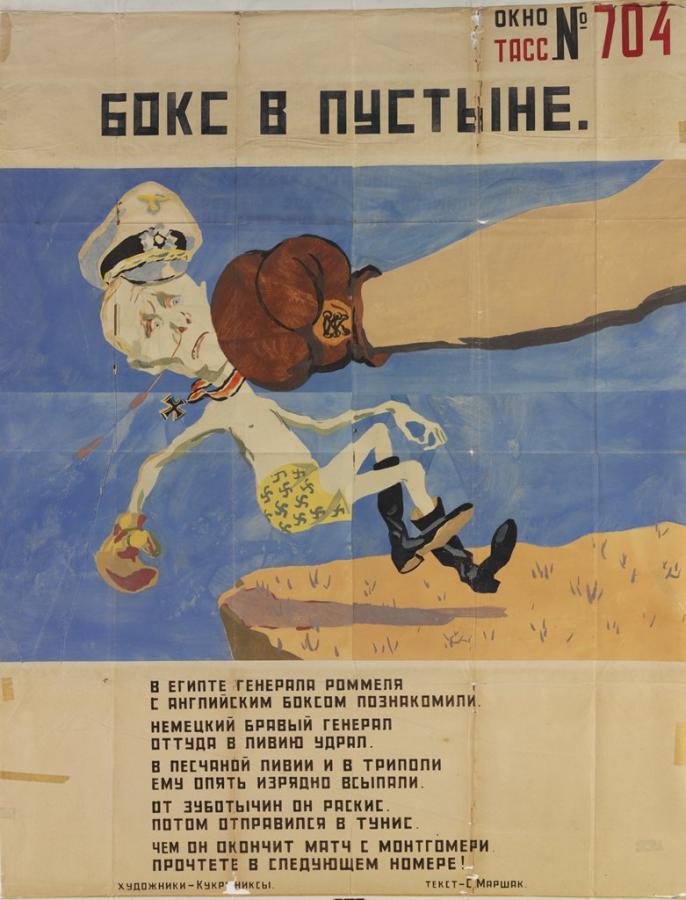 These posters feature themes ranging from supporting Soviet industry, to victory celebrations, and satires of Nazi leadership. Meeting Over Berlin depicts the USSR and Britain working together to bomb Berlin, with pilots from planes decorated with British and Russian insignia shaking hands as bombs are dropped on a cityscape. This depiction of friendship expressed the newly formed alliance between Russia and the Allies following the German invasion of Russia. 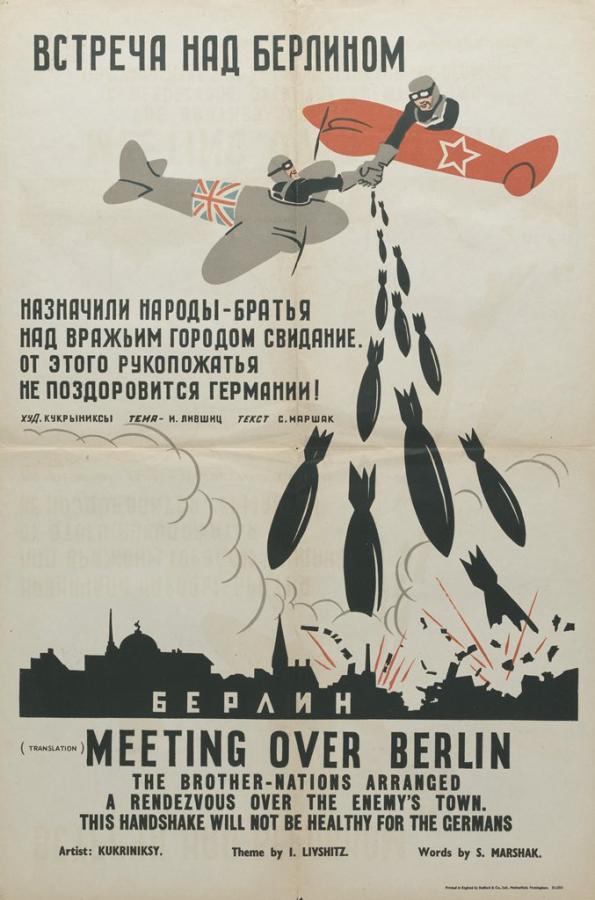 The Memorial’s example of this poster was printed in 1941 in Nottingham by Stafford & Co. Ltd. printers and features an image of the original TASS poster, with the later addition of the explanatory English text in the lower section. Stafford & Co. Ltd. purported to have received these images from Lord Beaverbrook, the British Minister of Supply, who was said to have received them from a meeting with Stalin at the Moscow Conference in late 1941. One of the most well-known of these overlapped images is Maneater, an image of Adolf Hitler gnawing on bones labelled as Allied nations. The TASS-designed image has been retained, but with the original Cyrillic changed into English. 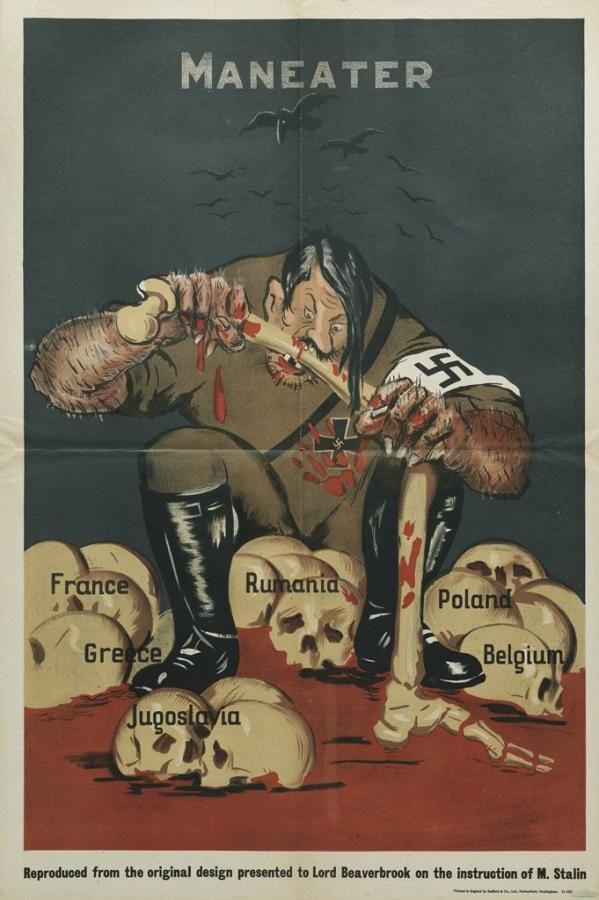 The British used these poster designs for their own political propaganda. The image that appears in Rush British Arms to Russian Hands, by Nikolai Radlov, came from TASS No. 68, published on 14 July 1941, just over three weeks after the German invasion. The poster depicts a stylised Adolf Hitler being throttled within the handshake of Britain and Russia, highlighting their new alliance and shared goal of defeating Germany. The lower section text of the poster is typically British: a play on the words “arms” and “hands”. 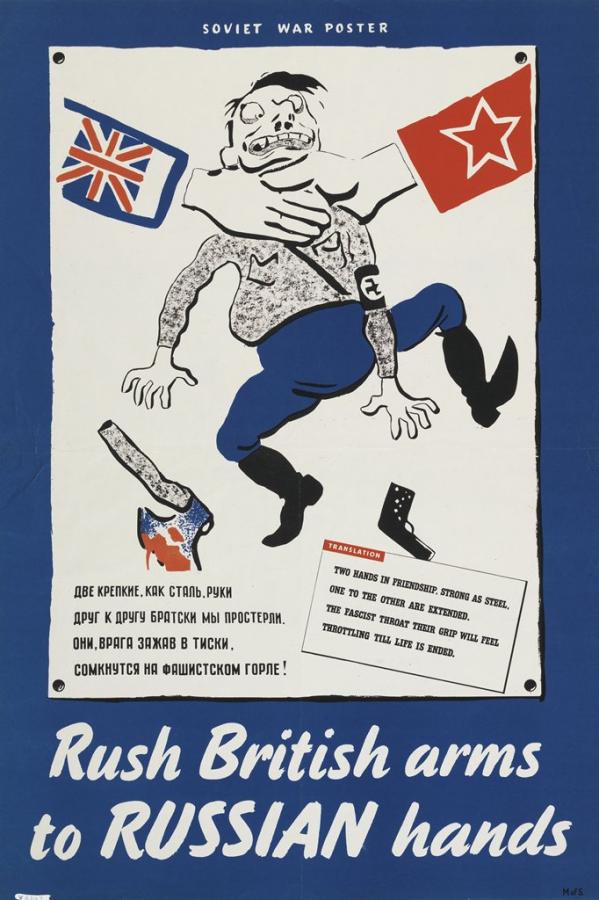 The poster Victory, probably aimed at the few English-speaking soldiers in Russia at the cessation of hostilities, features titles in Russian and English, with an image of the goddess of Victory holding Russian and British flags towing a Nazi gorilla behind her. 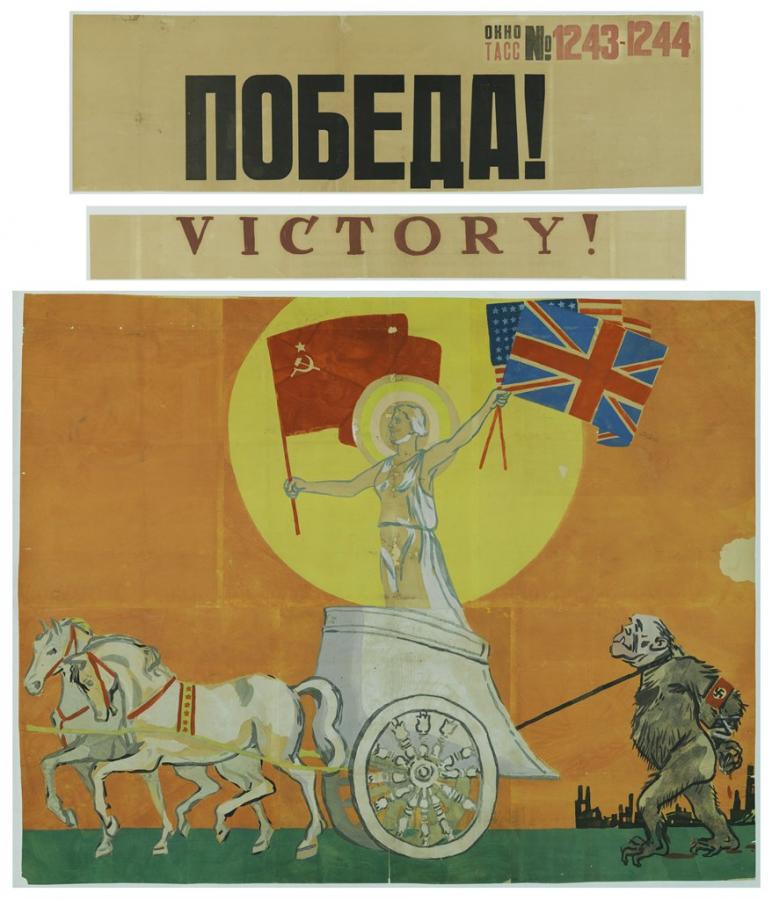 This group of TASS posters illustrates the variety and breadth of the Memorial’s poster collection. Today these posters are available for display in the Memorial’s galleries and to researchers on request.