Indigenous Australians were exempt from joining Australia’s military forces. Nevertheless, despite not being recognised as equal citizens in their own country, they tried to volunteer in the Australian Imperial Force (AIF). Many travelled hundreds of kilometres to enlist after being denied the chance at recruiting centres closer to their communities. It was the medical officer’s role to reject men on the basis of race. Many were accepted at recruitment only to be rejected later in the training camps.

It is estimated that around 1,000 Indigenous Australians fought in the First World War.

When war was declared, Charles Blackman was working as a labourer employed by Mr J.H. Salter in Biggenden, Queensland. Salter and Blackman were friends and corresponded throughout the war. In a letter, written in February 1918, Blackman tells Salter how his 9th Battalion comrades helped him out: “They treated me [as] good pals would.”

Once recruited into the AIF, Indigenous Australians tended to experience less discrimination than they would have within Australian society. They received equal pay, and were generally treated as equals by the other men. 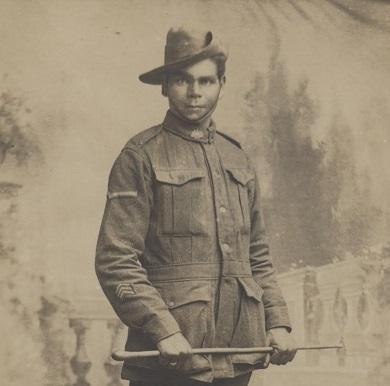