Out in the Cold: Australia's involvement in the Korean War - Kujin/Broken Bridge

After Yongju, the 3rd Battalion, Royal Australian Regiment (3 RAR), continued their advance into North Korea as part of the 27th Brigade. They were ordered to Pakchon, following the British Middlesex Regiment.

When 3 RAR's B company reached the town of Kujin (map) on the Taeryong River, only 3 kilometres away from Pakchon, they found that one span of the 300 metre bridge across the Taeryong had been destroyed. In an attempt to locate the positions of any enemy forces on the other side, two sections of 4 Platoon crossed the bridge on foot using makeshift ladders, under the command of Lieutenant A. L. Morisson. Once they reached the other side, fifty North Korean soldiers surrendered to the Australians, while being fired upon by another group of their comrades.

The Australians went back across the bridge to rejoin the battalion, taking ten North Korean soldiers with them as prisoners. Informed by an American spotter plane overhead that there were at least two enemy companies across the bridge, Lieutenant Colonel Charles Green ordered an air strike against them. American F-80 Shooting Star aircraft strafed the North Korean positions. After dark, however, it was back to fighting on land.

Infantry soldiers could get across the bridge, but tanks and other vehicles could not. A solution had to be found. A suitable bridge was discovered nearby, but it needed a night of work by American engineers to make it safe. In the meantime, Green ordered A and B companies to cross the broken bridge in the dark and dig in positions on either side of the road. D company was sent to secure the town of Pakchon. From 7.30 pm, for the next few hours enemy forces launched mortars, shells and small arms fire at the Australians on their side of the bridge, but the troops held out.

Fighting intensified after 10.30 pm with the use of small arms fire by the North Koreans. Reinforcements from C Company were sent across the bridge. During the night, the Australians fought against T-34 tanks and more North Korean infantry. At 4 am, North Korean troops unknowingly moved into the road where A company was positioned. When they were only metres away from each other in the dark, A Company opened fire with rifles, mortars and grenades, and the enemy forces, including a Russian T-34 tank, fled.

By the next day, the road was clear, and the rest of the brigade troops were able to cross the Taeryong River, and continue on their previous course. The fighting over "the broken bridge" had cost eight Australian lives and left 22 more wounded.

Sergeant Tom Murray, a drum major and stretcher-bearer, received the George Medal for his ingenuity and bravery in evacuating wounded across the broken bridge. At one point, he jumped into the freezing river without his coat, to rescue a casualty who had fallen in the water. 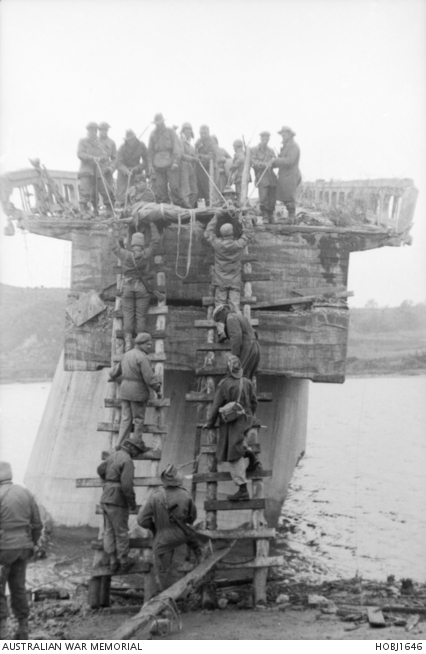 North Korea, October 1950. A wounded Australian machine-gunner is lowered from the wrecked bridge in the Pakchon area, as the United Nations keep up their steady advance against the retreating North Koreans on 26 October. Improvised scaling ladders and lines were used to lower the wounded man to where a jeep ambulance could take him to a dressing station. 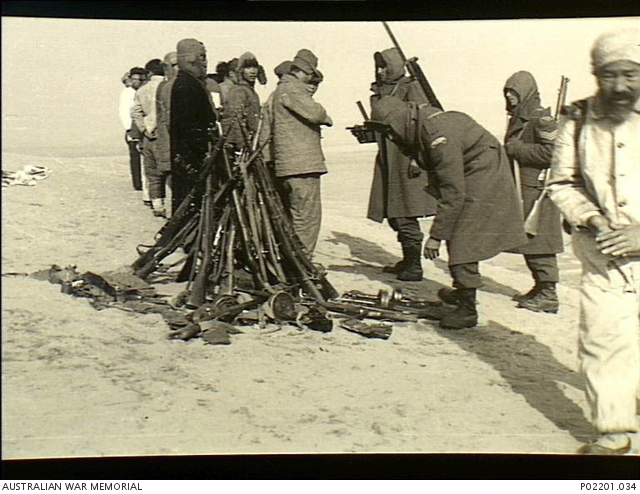 Korea, 1950. Lined up in two rows behind a stack of captured weapons, a group of North Korean prisoners-of-war (POWs) stands on a sandy riverbank, as they are watched by three members of the 3rd Battalion, The Royal Australian Regiment (3RAR), (right), who are wearing greatcoats and hoods as protection against the cold. The North Koreans surrendered when the Australians crossed the Taeryong River during their northward advance. 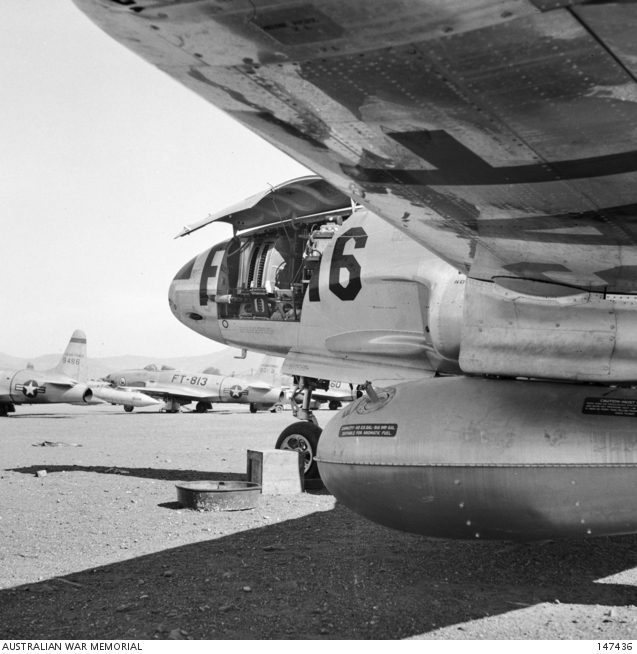 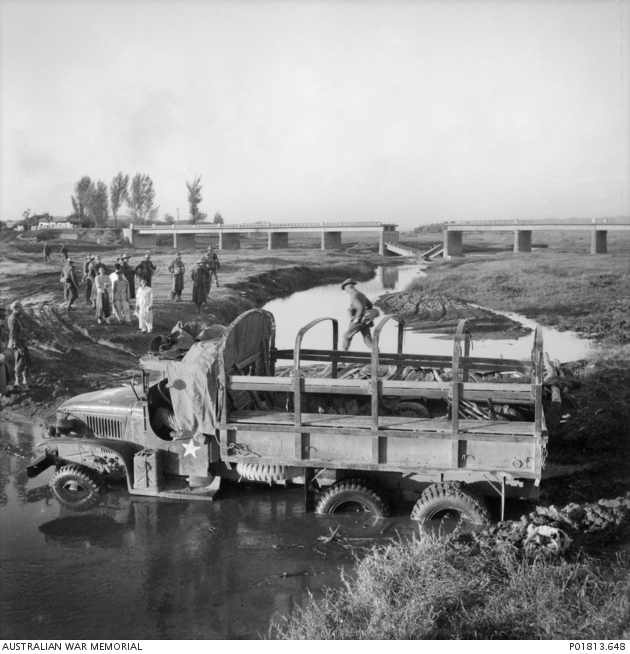 Taeryong River at Kujin, North Korea, c. 1950-10-26. Attempting to ford a stream, a US Army truck that had been carrying members of the 3rd Battalion, The Royal Australian Regiment (3RAR), stands bogged in mud and water. Looking on at right are several Korean civilians and some of the 3RAR soldiers who have got off the bogged vehicle. In the background stands a modern concrete bridge, one span of which has been demolished by retreating North Korean forces. 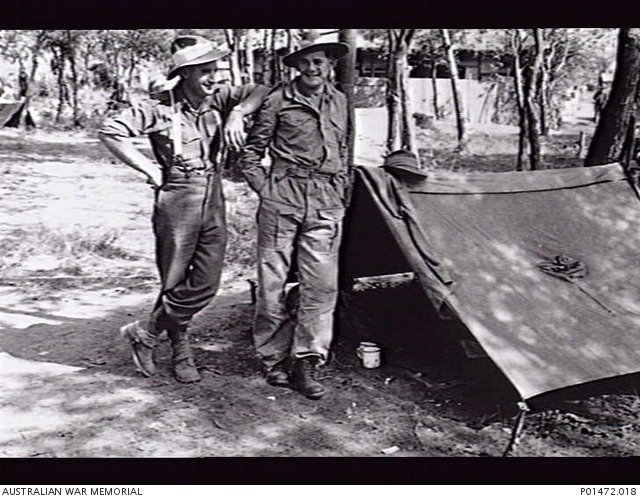 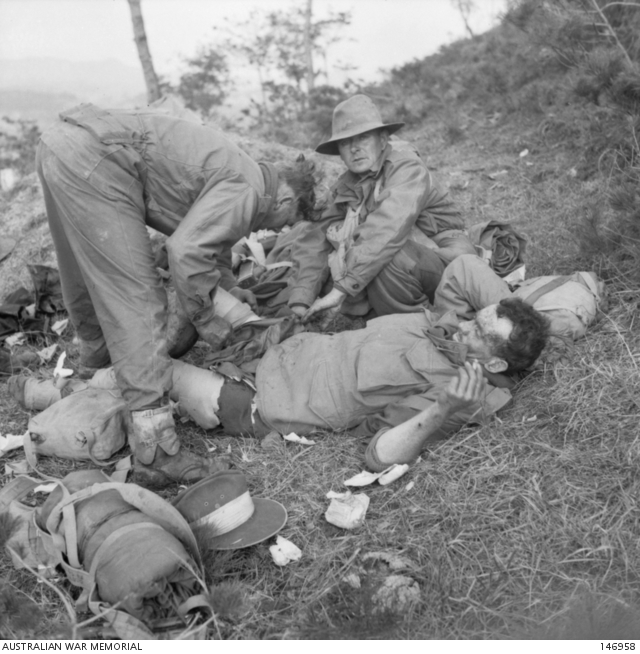 Sergeant Tom Murray (left) attends a soldier of A Company, 3 RAR, wounded in both legs at Pakchon, November 1950, by mortar fire while fighting in the hills.