“I just feel so happy about achieving something”: Operation Habitat and Humanitarian Aid in Northern Iraq 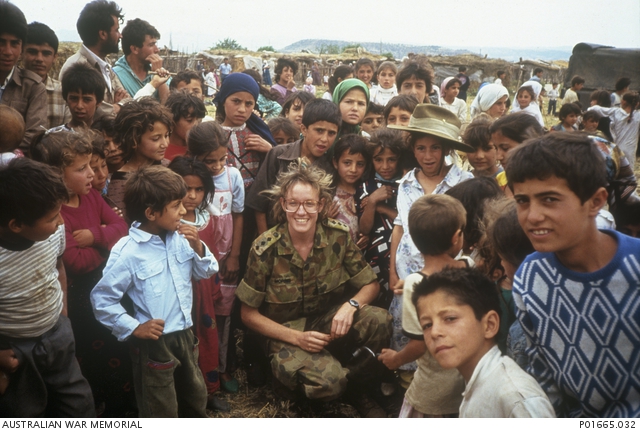 “I just feel so happy about achieving something,” reflected an exhausted Lance Corporal Julie Thomas in June 1991. For three weeks she had been travelling long distances and working in extreme heat to provide medical care to Kurdish refugees in northern Iraq. The 24-year-old medic from the 2nd Field Ambulance in Townsville was one of 75 Australian personnel deployed on Operation Habitat, Australia’s contribution to the United States-led humanitarian mission, Operation Provide Comfort.

Thomas found herself in Iraq in the wake of the 1991 Gulf War. Kurds in northern Iraq saw an opportunity in the defeat of Saddam Hussein’s forces and, in March 1991, mounted a rebellion to force his regime from power. The response from Saddam’s Iraqi Republican Guard was swift and brutal. In the face of artillery, tanks and helicopter gunships, the rebellion was crushed, and more than a million Kurds fled into Iran as 500,000 others sought refuge in the mountains by the Turkish border.

The international community responded by providing relief supplies to the Kurds, while the United States assembled a coalition to deliver on-the-ground security and aid. Seeking additional medical support for this force, the United States requested a contribution from Australia.

Major Jonathon Hodge received two days’ notice of his deployment. As the Senior Medical Officer for Operation Habitat, Hodge recalled a flurry of activity as he helped select the personnel to go, underwent a battery of tests and vaccinations, and attended myriad meetings and security briefings. Hodge departed for Turkey on 4 May with the four other members of the advance reconnaissance party, which included the contingent’s commander, Lieutenant Colonel David Ross. 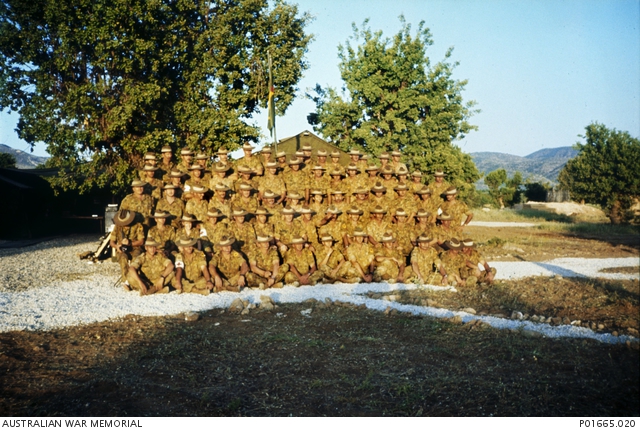 The main body followed on 16 May. The contingent had been drawn from a range of specialisations since, as Major Mark Little acknowledged, the medical mission was “extremely vague” with only limited information available on the state of the Kurds or the conditions in the mountains. Accordingly, Operation Habitat included four medical officers, a pharmacist, a dentist, four nursing officers (including an experienced midwife), a hygienist, a dental technician, and 12 medics. The force also included a preventative medicine section of army and Royal Australian Air Force scientific officers and health inspectors, who would help to improve hygiene and sanitation conditions, as well as engineering and trades personnel to pump and purify water.

By the time the contingent arrived in southern Turkey, Ross and Hodge had visited refugee camps to better understand the situation in Iraq. Hodge, though, had grown frustrated with the waiting and inaction, noting in his diary, “I’ll be glad when we get down to it.” 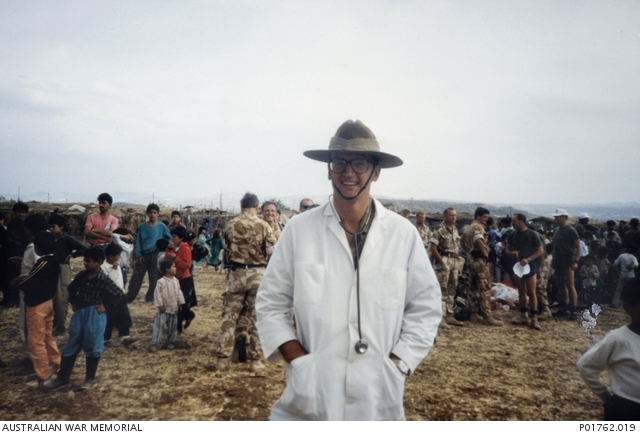 The Australians finally departed Turkey for Iraq on 23 May. The journey proved to be an inauspicious start for the contingent, which travelled on two aged Turkish buses. About three hours into their 650-kilometre journey, a rear tyre burst and tore through the floor on the second bus. Lieutenant Geoff Baker, who was sitting over the wheel bay, sustained a sprained ankle, Captain Jane Morris suffered superficial burns to an arm and both legs, and Corporal Mick Caldwell received a small metal fragment in his eye. Caldwell had to be evacuated to a hospital in Germany for treatment, but returned to duty a few days later.

The Australians established camp near Gir-i-pit. In contrast to the “mountain valleys, with green grass and wildflowers” Hodge noted during the journey, Gir-i-pit was a destroyed village in a valley of wheat fields. The daily temperature often topped 50°C, the local water supply was faecal-contaminated, and the valley was laced with landmines. Within three days of the Australians’ arrival, two American soldiers were killed and at least four others wounded in four separate landmine incidents. Lance Corporal Thomas was quick to reassure her parents, though, that the Australians were careful not to “go anywhere other than our track plan”.

It was not long before the contingent established a routine. As the preventative medicine and sanitation sections got to work improving conditions, the medical treatment personnel split into four teams, each consisting of a medical officer, a nurse and three medics. One team would remain at camp each day operating a regimental aid post, as the remainder took to the road. 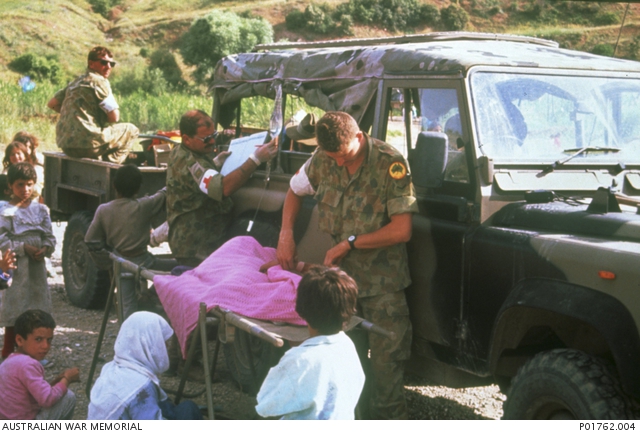 The roving treatment teams, as Thomas described it, drove “around the mountains stopping at little squatts along the way seeing if anyone wanted medical treatment”. By now most of the Kurds had returned from the mountains, but many were living in tents or lean-tos beside roads and destroyed villages. Treatment teams would travel up to 200 kilometres and tend to as many as 40 to 100 patients each day. 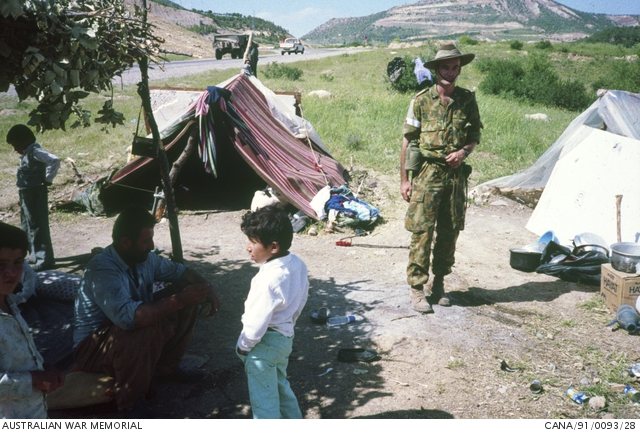 Major Mark Little at one of the roadside camps visited by the roving medical treatment teams.

Surgical capacity was one of the few specialities missing from the contingent, so anything more serious had to be treated at the British military hospital nearby. The majority of the contingent’s patients, though, were children suffering from infectious diseases or malnutrition. To combat some of these problems, Lieutenant Karen Bayliss and Sergeant Sandra White established an infant feeding clinic at Bagera. A shortage of infant formula early on meant the team had to be innovative and use a mixture of flour, sugar, and oil to bring many babies up to a healthy weight.

The care and support provided by the Australians was met with appreciation by many of the Kurds. At one of the first roadside camps they visited, Hodge and Thomas’ team was invited to tea by a grateful group of locals. “The[y] put blankets down all nicely on the dirt and brought out little tiny cups with tea in it,” Thomas wrote to her parents. “The tea was very sweet … as soon as your cup was empty they would fill it straight away.” 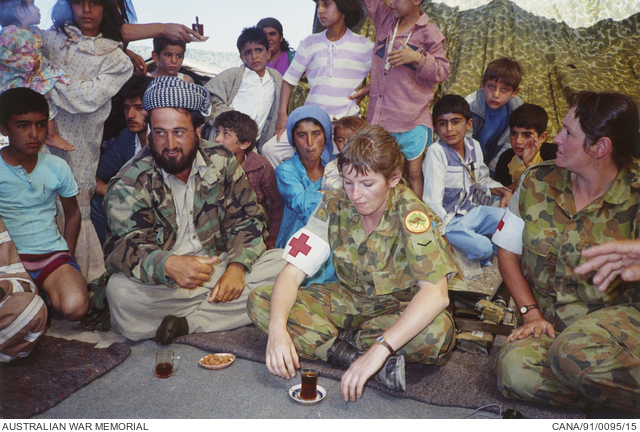 Not everyone, however, was welcoming of the coalition presence. The roving medical teams carried either M-16 rifles or 9mm pistols for protection but, following a tense encounter between Hodge’s team and a band of Peshmerga (Kurdish guerrilla forces), security precautions were tightened. The roving teams were thereafter accompanied by armed escorts from the nearby British 3 Commando Brigade.

The Australian contingent continued to operate at a high tempo until mid-June, when Operation Provide Comfort – and Habitat under it – handed over responsibility to the United Nations. The camp at Gir-i-pit was dismantled on 14 June and the Australians prepared for departure, but not before besting the British in a friendly cricket match attended by a mass of local spectators.

The contingent departed by C-130 Hercules aircraft over 16 and 17 June, having completed 24 days of exhausting work in Iraq. Many were disappointed to have departed so soon, with Thomas remarking: “we really got here too late.” The Australians had, nevertheless, made a distinct contribution – the engineering and preventative medicine personnel had improved sanitation and established water points at refugee camps, while the roving teams and dental section had treated more than 3,400 patients. 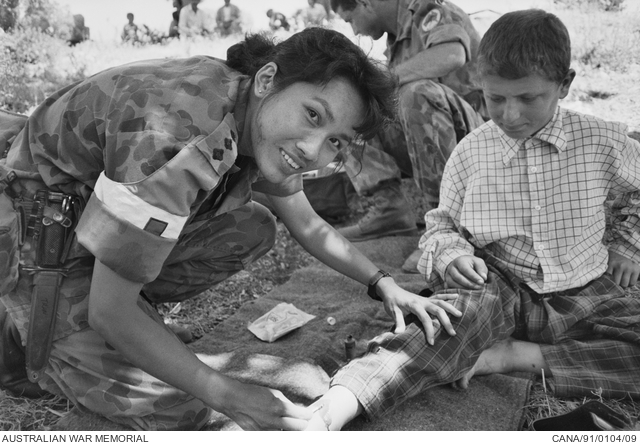 Operation Habitat marked the first time the Australian Army had deployed women armed, and the first deployment of an Australian medical contingent since the Vietnam War. This significance was not lost on Captain Tam Tran, who had arrived in Australia as a Vietnamese refugee. The destruction witnessed in northern Iraq brought back memories from Tran’s childhood. Her strongest memories of Operation Habitat, though, were of “the people and the children I met and treated”.