A Walk in the Light Green

I was only 19 was released in March 1983 when discussion of the Vietnam War, which had so fiercely divided public opinion a decade earlier, was generally avoided in polite conversation. A generation of veterans had been left feeling isolated and with a belief they had been forgotten by their country. I was only 19 provided a fresh perspective, presenting a compelling sympathetic account of an Australian soldier’s experience of the war and its aftermath. Concentrating on the toll paid by those who took part rather than debating the merits of the war itself, it became the quintessential song of the Australian Vietnam War veteran.

John Schumann ­– who was the lead singer of Redgum at the time the song was written – based the lyrics on the experiences of his brother-in-law Mick Storen, who served with 3 Platoon, A Company, 6 Battalion, Royal Australian Regiment (6RAR) in Vietnam in 1969.

The song’s alternative title, A walk in the light green, refers to patrolling in a patch of jungle known by troops as “the light green”, due to its colour on topographical maps, indicating lightly wooded areas presenting little cover and a high likelihood of land mines. The song refers to events that occurred during Operation Mundingburra, a search and destroy operation conducted between 14 July and 18 August 1969, during which Mick Storen’s platoon patrolled in the light green to the east of the Long Hai hills.

To view the exhibition items, video clips and additional information please click on the underlined song lyrics below.

I Was Only 19
A Walk in the Light Green

Mum and Dad and Denny saw the passing out parade at Puckapunyal,
(It was long march from cadets).
The Sixth Battalion was the next to tour and it was me who drew the card…
We did Canungra and Shoalwater before we left.

And Townsville lined the footpath as we marched down to the quay;
This clipping from the paper shows us young and strong and clean;
And there's me in my slouch hat, with my SLR and greens…
God help me, I was only nineteen.

From Vung Tau riding Chinooks to the dust at Nui Dat,
I'd been in and out of choppers now for months.
But we made our tents a home, VB and pin-ups on the lockers,
and an Asian orange sunset through the scrub.

And can you tell me, doctor, why I still can't get to sleep?
And night time's just a jungle dark and a barking M16?
And what's this rash that comes and goes, can you tell me what it means?
God help me, I was only nineteen.

A four week operation, when each step could mean your last one on two legs:
it was a war within yourself.
But you wouldn't let your mates down 'til they had you dusted off,
so you closed your eyes and thought about something else.

Then someone yelled out "Contact", and the bloke behind me swore.
We hooked in there for hours, then a God almighty roar;
Frankie kicked a mine the day that mankind kicked the moon: -
God help me, he was going home in June.

I can still see Frankie, drinking tinnies in the Grand Hotel
on a thirty-six hour rec. leave in Vung Tau.
And I can still hear Frankie lying screaming in the jungle.
'Till the morphine came and killed the bloody row

And the Anzac legends didn't mention mud and blood and tears,
and stories that my father told me never seemed quite real
I caught some pieces in my back that I didn't even feel…
God help me, I was only nineteen.

And can you tell me, doctor, why I still can't get to sleep?
And why the Channel Seven chopper chills me to my feet?
And what's this rash that comes and goes, can you tell me what it means?
God help me, I was only nineteen. 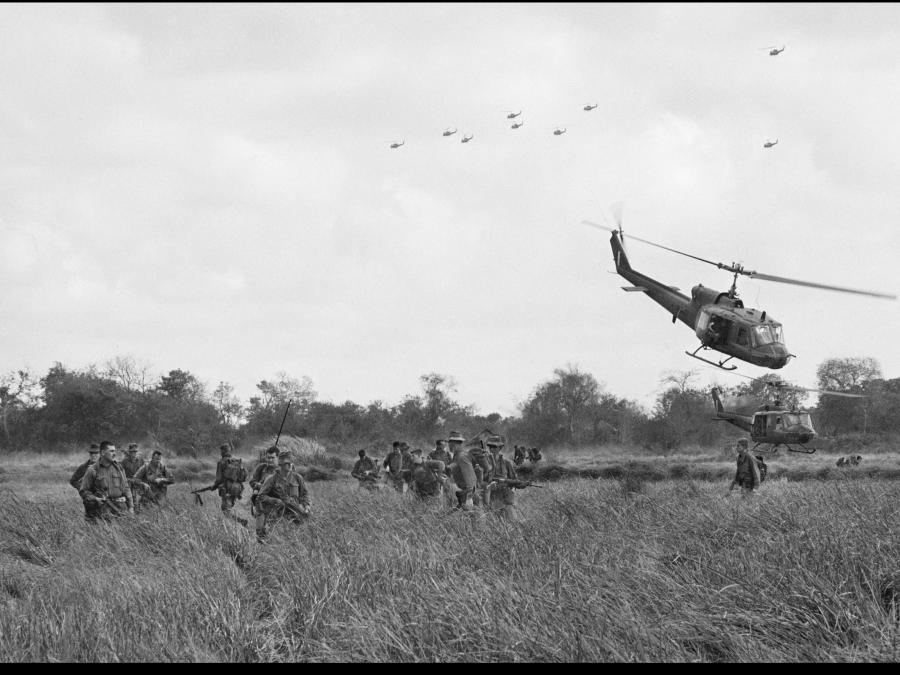 Item No.2: This photograph taken by Michael Coleridge in 1967, shows RAAF and American helicopters in the sky and swooping over a rice paddy in South Vietnam as they land troops of the 6th Battalion, The Royal Australian Regiment (6RAR), into a landing zone for a search and destroy operation south-east of the Task Force base at Nui Dat.  Taken during the first tour of 6RAR, the scene would have looked much the same to Mick two years later during Operation Mundingburra. Australian War Memorial, Photographs Collection COL/67/0198/VN

View A Walk in the Light Green credits