Australia under attack: A family tragedy

John Cubillo, a Larrakia man, was working as a wharf labourer in Darwin when war broke out. Soon afterwards, his wife, Louisa, and their nine children left Darwin for safety.

On 19 February 1942, a bright, clear summer Thursday, John Cubillo was helping load the hospital ship Manunda when it was attacked by Japanese aircraft. He was one of more than a dozen killed aboard or near the Manunda that day.

Lousia and the children were camped in Katherine when the news that John had been killed reached them. After the air raid on Katherine they were evacuated to South Australia. Teenage daughter Mary recalled: “One of the wharfies who survived saw my father running after the boat and it got a direct hit … they never ever found his body.” 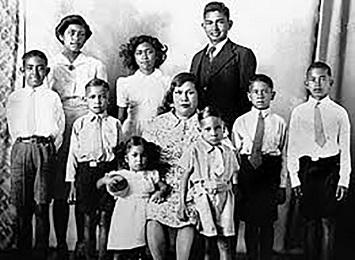 Louisa Cubillo and her nine children