Evidence of the attacks on Australia can still be seen across the nation: from derelict gun emplacements and overgrown airfields to the foundations of dismantled barracks and fortifications, from the wrecks in Broome to the base of the boom defence at the entrance to Sydney Harbour.

Those who lived through these years still remember the harrowing days of air attacks and the threat of invasion. Their speech occasionally echoes the slogans of home-front Australia. Those who lived through these years remember shopping with a ration card and spending their precious spare time on civil defence activities. They remember their men who embarked for “overseas” and did not return, and the sights and sounds of foreign soldiers in their pubs and on their streets.

They remember living with the knowledge that the enemy was only just over the horizon.

Every year, on Anzac Day, Australians gather to commemorate the sacrifice of our servicemen and women in war. Veterans muster and march behind the banners that carry the symbols and battle honours of their unit.

Those who served on the hospital ship Manunda in Darwin when Australia was first under attack, and on its later service in the Pacific, marched behind this banner on Anzac Day parades in Sydney from the 1950s until recently. They marched in memory of the thousands of medical personnel and patients who served in, or suffered on, Manunda between 1942 and 1946. 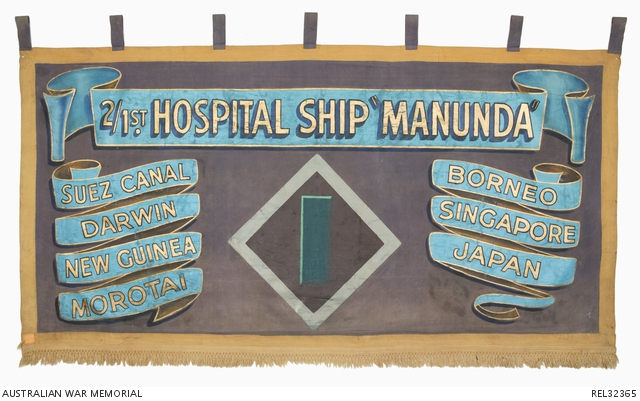 Anzac Day banner carried by veterans of the Manunda