Studio portrait of Alan and Raelene Graham (nee Clark) taken on the day of their wedding, ... 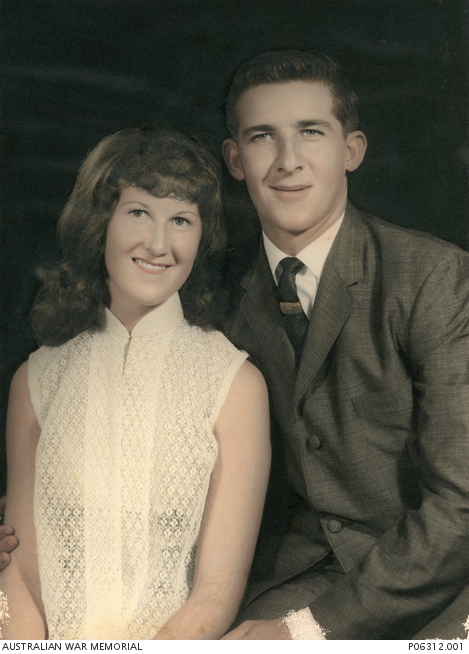 Studio portrait of Alan and Raelene Graham (nee Clark) taken on the day of their wedding, probably in Port Augusta, in 1965.
Alan Walter Graham, a regular soldier (43528), serving in the 4th Battalion, The Royal Australian Regiment (4RAR) based at Woodside in South Australia. When 4RAR was deployed to Malaysia in August 1965 the newly married couple found themselves living in married quarters near the garrison town of Terendak. The battalion was deployed to Borneo in April 1966 to face the Indonesians during the final stages of Confrontation. Private Graham, a member of A Company 4RAR, served with his company at Gumbang. When Confrontation ended 4RAR was transferred to Malacca until the battalion returned to Australia in October 1967. During this time the couple had a son who was born in the Military Hospital at Terendak. The now Corporal Graham was posted to 9RAR, which was formed at Keswick Barracks, Adelaide, for service in Vietnam. 9RAR embarked on HMAS Sydney in Adelaide 9 November 1968, arriving in Vietnam on 20 November 1968. The battalion commenced operations in Vietnam on 10 December 1968. Corporal Graham was killed in action on 7 January 1969.
His wife Raelene, died by her own hand on 8 January 1969. They are buried together in the Stirling North Cemetery, Port Augusta, SA.